Now it appears that Google has decided if it can’t have StumbleUpon, it will just build similar stumbling ability into its toolbar, with a “dice roll” feature that produces random links. Om Malik says that he thinks Google is lashing out at SU because they lost out on the acquisition, but I think it’s more likely Google decided they could build the same functionality for a lot less than $45-million.

Chris Sherman over at Search Engine Land says he got a comment from Garrett Camp, one of the founders of StumbleUpon, who says there is no truth to the rumours. But then, he would say that, wouldn’t he 🙂 And Muhammad Saleem at ProNet Advertising says he can see some synergies between eBay and StumbleUpon involving the latter’s word-of-mouth marketing potential. Pete Cashmore has some thoughts along the same lines.

Mike Arrington at TechCrunch and Om Malik at GigaOm seem to have a kind of tag-team scoop going about StumbleUpon — the social Web-surfing app that was created in Calgary — being acquired by eBay for between $40-million and $45-million. Mike seems to have broken the story first, but gives Om credit in an update for narrowing the alleged price range, while Om has an update that mentions Mike as having pinned the likely suitor down as eBay. 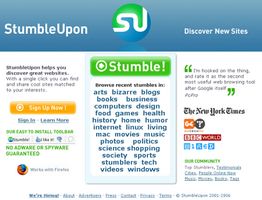 Reports are that StumbleUpon, which got some venture capital money last year and moved to the Valley, has been in talks with eBay, Google and AOL, and that the company has signed a term sheet with eBay. The company has been the subject of acquisition rumours since November. Of course, there are no shortage of takeover-talks stories that don’t actually come to pass — including some that involve Canadian companies, such as the rumours that Albert Lai’s Bubbleshare was going to be bought by News Corp. (it was eventually bought by Toronto-based Kaboose).

StumbleUpon has developed a substantial following by doing one simple thing: sending people to random websites, at which point they can vote on whether they like the content or not. And the service can drive a lot of traffic to sites that get stumbled, although there are debates about how much value there might in that traffic, as there is with Digg.

With all due respect to Om, I don’t get his explanation of why eBay might want StumbleUpon, which seems to involve some kind of integration with Skype. But then, I never understood why eBay bought Skype in the first place, so that’s par for the course, I suppose. My friend Mark Evans says he doesn’t really understand it either.