(cross-posted from my Globe and Mail blog)

CNN — the real-time news star of a previous generation — has teamed up with YouTube, the king of “user-generated” video, to inject a little reality into the U.S. presidential debates (which are usually choreographed within an inch of their lives so that no one accidentally says what they’re really thinking). The two media giants have set up a joint venture in which average citizens will be able to submit questions, and CNN will choose two questions that will be played for the candidates during the upcoming Democratic debate. 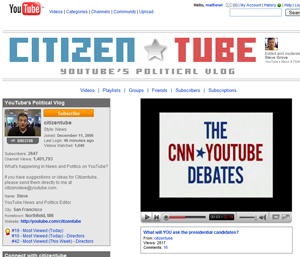 According to a press release from the two companies, “select YouTube users” will also be in the audience during the live debate, which is scheduled for July 23 and will be moderated by Anderson Cooper. The plan is to do something similar for the Republican candidate debate, but one hasn’t been scheduled yet. According to a conference call with a CNN executive and YouTube CEO Chad Hurley, blog postings and discussion in online forums may also influence the debate.

YouTube political editor Steve Grove and Anderson Cooper describe how the video portion of the Democratic debate is going to work in (what else) a YouTube video. The YouTube Debate site joins several other YouTube “channels” related to the election: several months ago, the video-sharing site (owned by Google) set up a site called CitizenTube — which is moderated by Grove — and the site also has a channel called You Choose, where the candidates can upload videos.

Most of the candidates have embraced video to some extent, and both John Edwards and Barack Obama announced their candidacy with videos. Hillary Clinton recently recorded a video about her search for a new campaign song, in which she poked fun at her critics by using YouTube clips. But candidates have also been burned by video clips — such as the video of George Allen calling someone a “macaca,” which pretty much ended his campaign — and the public reaction to videos such as the Hillary1984 video (or the video mentioned in this blog post) is unpredictable.

For political purposes, the Internet is “a chaotic message environment,” Alan Rosenblatt says in a post on TechPresident.com, “precisely because it enables anyone, as long as they have access to a wired computer, to post their own ideas and opinions.” Sometimes that can be good, and sometimes not so much.