So Business 2.0 magazine loses another writer/blogger, and Valleywag loses Nick Denton (again). Owen Thomas has jumped from his B2.0 blog duties to the editorship of the ‘Wag. Denton says he has been trying desperately to get rid of the editorship — although I suspect he has been having a pretty good time. As for Thomas, he could be forgiven for having a few butterflies about the move, given what happened to his predecessor, Nick “the other Nick” Douglas. 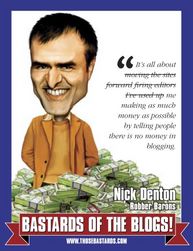 The other Nick was fired by Denton and then-editor in chief of Gawker Media, the wonderfully named Lockhart Steele (the other Nick was let go for, among other things, joking about lawsuits). Douglas, who looks barely old enough to drive, went on to launch his own blog project called Look Shiny (and just launched a live-blogging effort as part of Justin.tv). Given his track record, which extends back from Business 2.0 through Time mag and a bunch of other jobs, all the way (as Om mentions) to the venerable Suck.com in the late 1990s — a veritable treasure trove of smart writing and sardonic wit that I miss a lot — it sounds like Owen can probably handle the job.

I sure hope that Thomas can keep the Wag on the roll it’s been on since Denton took over again. I know that Mike Arrington believes Nick is the spawn of Satan — or at least one of his senior lieutenants — but I confess that I find much of what Valleywag writes a refreshing antidote to some of the breathless coverage that’s out there, and as my friend Paul Kedrosky points out, Nick has done a pretty good job of breaking news too.