Way back in the mists of time, Internet-wise, there was Jenni-cam — a camera (and later, cameras) trained upon Jennifer Ringley 24 hours a day, regardless of what she was doing. That seemed kind of weird, but after awhile it wasn’t really that weird at all. Now there’s Stickam, where hundreds of people stream their video-cameras, and Justin.tv and now Ustream.tv, which lets anyone create their own personal version of the movie EdTV. 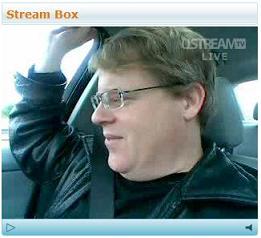 Not content to let Justin have all the fun, geek trailblazers Robert Scoble and Chris Pirillo have been experimenting with Ustream. At one point today, I was watching Chris Pirillo’s webcam, which was broadcasting video of him watching Robert Scoble’s webcam, which was broadcasting video of him driving in the car. Fascinating stuff. About the only interesting part of the whole process was the discovery that a bunch of people seem to think Chris Pirillo’s new wife Latthanapon “Ponzi” Indharasophang is hot (and he agrees).

Is there such a thing as too much information? Twitter allows Scoble to update me and several thousand other people on his location every couple of minutes, and it’s the reason I know Jason Calacanis was in Barcelona. Thanks to Ustream, I know that Scoble was in the passenger seat on his drive with Maryam, and that it was raining — and I know that Chris Pirillo has two 21-inch (or possibly 30-inch) monitors on his desk.

What is the purpose of all this knowing? Who knows. As trivial as it all sounds — Chris calls it the “narcissystem,” which I think is pretty close to the mark — I did find it fascinating to listen to him describing how when he heard there was an earthquake, he got one of his Twitter followers in Acapulco to give him his Skype ID and interviewed him on the spot, with others conferenced in via a free teleconference service. Is this the future? Are we on our way to the metaverse?

Allan Stern at Centernetworks has some thoughts along the same lines, and so does Brian Solis. Jeremiah Owyang has more about the setup that Ustream did for both him and Scoble, which is similar to what Justin uses, and Rick Mahn makes an interesting point in Jeremiah’s comments: What if people had these rigs during the U.S. election campaign? Now that would be interesting. If I were Ustream CEO Chris Yeh, I would get together with Huffington Post and NewAssignment.net for their “crowdsourcing” Politics 2.0 experiment.

Interesting point from Jason at Webomatica, who says that “these real-time technologies rather seem like a step backwards to the days where you had to be at a certain place and time and pay attention or you missed it.”